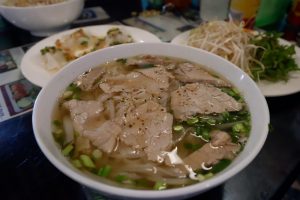 Vietnamese beef noodle pho (pronounced variously as /fʌ/, /fə/, /fər/, or /foʊ/) is a soup to take a fancy. A bowl of hot pho is always a great choice on a cold evening or after a hard day at work.
Those crispy noodles, that tasteful broth, the delicate slices of beef — all those aromatic herb we sprinkle over the top – bring unique flavours and texture to our Pho

Vietnamese pho is really all about the broth. Pho is not pho without its broth. The broth is the element that gives pho its life and soul. Making own pho at home is long-simmer process, combining beef bones with aromatics like onions and ginger to make a deeply savory broth. For quality pho, the time required to make a great broth is a process that takes up to a day or more but the time it takes to create pho broth is definitely worth it.

When pho craving hits on a random weeknight, we can make a much quicker Pho get close to the flavor of real Pho by infusing broth with special aromatics. Here the way to make this:
1. Clean all vegetables with water added a little salt in 2 – 3 times. Then, clean again in fresh water. Peel the onions and ginger . Cut onions into quarters through the root. And then slice ginger into quarters down its length.
2. Using tongs, char the onions and ginger in open flame( 5 minute on each side). Remove the charred bit by cool water or your broth will turn out black.
3. Toss all of the spicies in a hot pan: Placing the star anise and the cloves lightly in a dry pan, stirring often, until the spices are fragrant and lightly toasted, about a minute.
4. Add enough cold water to cover all the ingredients in the pot, combine the charred onions and ginger, rock sugar, salt, and one soup spoon of fish sauce.
5. Place the beef meat( sirloin or brisket is the best) in the broth pot to a boil over medium-high heat, then reduce the heat to medium-low, and let it simmer for 30 minutes more to have tasty broth.
6. While the broth is simmering, put the beef on a plate, cover with plastic wrap, and put in fridge for 15 minutes.This will make easier to cut meat thinly.
7. Take out the beef from freeze , thinly slice the meat and pound it with the blunt edge of the knife and make sure thin slices no thicker than 1/4-inch.
We reach the halfway to make a wonderful pho.

We already knew the key to the Vietnamese noodle soup pho is in the broth. But we’re not done yet,many people forgot the noodles, it was very important ingredience to make wonderful Pho. So let’s discover:

1. You need to soften the noodles: Bring a pot of water to an almost-boil. It doesn’t need to be bubbling, drop in the rice noodles and cook according to package instructions (typically 1 minute for very thin noodles and up to 4 minutes for wider noodles). Put a handful of presoaked noodles into the strainer, give the noodles a swirl, and remove as soon as they’re soft or else they’ll get mushy.
2. Assemble the toppings: Thinly slice the spring onion and the chili pepper. Cut the lime into wedges. Place the bean sprouts in a serving dish. Roughly chop the herbs or tear them with your hands. Arrange all the toppings on a serving dish and place it on the table.
3. Strain the broth: Place the broth back over low heat and keep it just below a simmer — you should see a fair amount of steam, but the broth should not be boiling. The broth needs to be quite hot to cook the beef.
4. Layer the ingredients: Arrange the bowl in this order: divide the noodles between serving bowls and top with a few slices of raw beef.
5. Top it off with the chopped green onions and the sliced green onions (and finely chopped pieces of ginger if that’s your thing).
6. Then pour the boiling hot broth over the raw beef (The beef should immediately start to turn opaque).

Finally, enjoy the result with the people you love most!!!