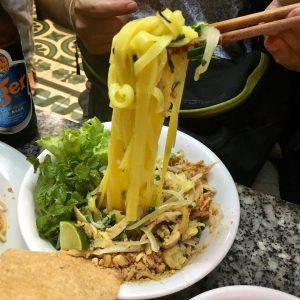 Mi Quảng (also spelled mỳ Quảng), (literally: Quảng style noodle) is a Vietnamese noodle dish that originated from Quảng Nam Province in central Vietnam. In the region, it is one of the most popular and nationally recognized food items, and served on various occasions such as at family parties, death anniversaries, and Tết. Mì Quảng can also be found in many restaurants around the country, and is a popular lunch item.

Mì quảng can also be served without broth, as a salad (mì quảng trộn).